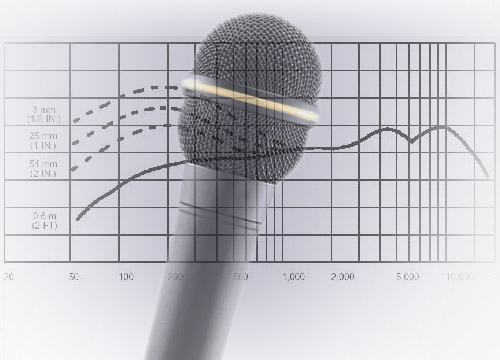 An important yet often misunderstood characteristic of directional microphones is proximity effect.

The proximity effect is one that exists in microphones with any of the cardioid (cardioid, super-cardioid, hyper-cardioid, ultra-intersellar-cardoid—OK, I made that last one up…) patterns.

As the mic is moved closer to the sound source, the low end response of the mic is boosted.

On this graph, the solid line represents the response of the mic at 12-inches from the sound source. The dashed line shows the response at 2-inches, and it’s clear how much the lower octaves are boosted.

This can be desirable for vocals, as it tends to add warmth and a nice bottom sound. However, those boosted lower frequencies can also be overpowering and cause the sound to get what we often call “muddy.” Clarity can suffer at times depending on the vocal and the sound quality of the mic.

We need to be aware of the proximity effect for two reasons.

First, when we’re using cardioid vocal mics (and we almost always are), if we’re hearing excessive low end in the vocal, we know exactly where to roll off that low end to bring it back down to a more manageable level.

Second, if a vocalist is moving the mic all over the place, near and far, the low end response is going to change. That makes it difficult to get a consistently good sound.

At that point, we need to have a quick discussion with them (and not via the talkback mic…) about holding the mic at a more consistent distance from their mouth.

It’s important to note that the proximity effect isn’t all bad. We can take advantage of it when we need some extra low end. Keeping guitar mics right close to the cabinet will help emphasize the lower registers. And if we’re getting too much low end, before reaching for the EQ, try pulling the mic back a little bit.

The same can go for drum mics. So, experiment with moving them closer and farther from the drum heads to see what kind of sound you get.

Typically they work best pretty close, but sometimes backing them off just a little will clean up the low end overtones. Other times, keeping them really tight will help emphasize the low end (especially in floor toms) and give you some extra oomph.

I like to take a look at the frequency response graphs of mics I’m using to get an idea of how they will respond at various distances.

Some manufacturers are really good at providing good data, others are not. However, more information is always better, so take a look at your mic manuals, or search them out on the manufacturer’s websites. Having a good idea of how your mics react will help you get the most out of them.

Mike has been involved with church sound and live production for more than 25 years, and is the author of the Church Tech Arts blog. Based in Nashville, he serves as the Maker of Magic for Velocity Pro Systems, which provides design-build production solutions for churches and other facilities.
All Posts
Top Stories
Explore All Study Hall