Speakers On A Snake

Just because something can be plugged into a connector doesn't mean that it should be... 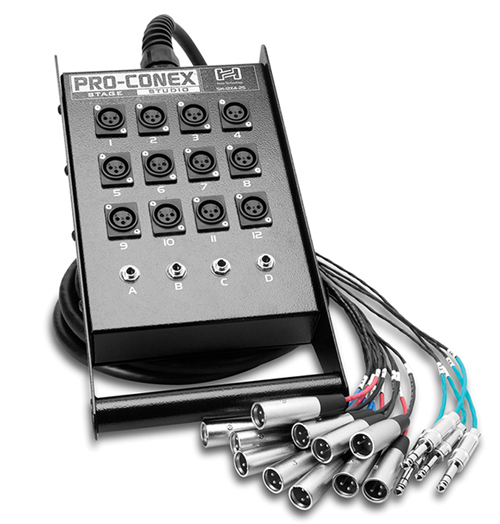 Here’s something I’ve seen in at least three churches over the last several months, so I know it happens.

Let’s suppose there’s a standard 100-foot audio snake from the console position running to the stage. But instead of putting the amp rack on the stage, maybe the facility is using a powered mixer at front of house, or the amp rack is already sitting next to the mixer.

A look over at the audio snake shows XLR inputs from the microphones, but there are also two or four TRS 1/4-inch jacks that look just like the 1/4-inch loudspeaker jacks on the back of the powered mixer or amplifiers.

Figure 1 shows a standard Hosa Technology snake with 24-gauge wires for both the XLR mic inputs as well as TRS 1/4-inch returns. Looks like you can plug the TRS fan-out end into the back of a power amp and passive stage monitors into those phone jacks on the stagebox, doesn’t it?

Well, we know this “sort of” works, but there’s a certain amount of wattage loss from the 100 feet of 24-gauge cable instead of 100 feet of 12-gauge cable, which is industry recommended for this sort of loudspeaker run.

Just how much loss will there be? Glad you asked…

Let’s consider a standard situation where there’s a power amplifier rated with an output of 500 watts at 8 ohms and 1,000 watts at 4 ohms. Also, let’s drive a pair of 8-ohm passive monitors on each amplifier channel, which makes a load of 4 ohms.

Assuming no loss in the cabling, that’s 1,000 watts coming from the amp, which splits up to 500 watts for each of the 8-ohm speakers. That’s exactly how it’s supposed to work.

And because we have to consider that there are two legs of this wire, it adds up to 200 feet and more than 5 ohms of resistance in series with the loudspeakers.

But it gets worse. We also have to factor in a voltage divider with 5 ohms of series resistance added to a 4-ohm load. That’s 4/9 times the 430 watts of power, so it’s now down to 190 watts of power being delivered to the 4-ohm loudspeaker load.

Finally, divide that 190 watts by 2 since there are two 8-ohm loudspeakers connected in parallel (Figure 3). It’s now down to less than 100 watts being delivered to each loudspeaker instead of the 500 watts that was paid for and expected. Yikes.

This shows that using a 24-gauge snake return to drive a pair of 4-ohm passive loudspeakers results in throwing away 80 percent of the amplifier power.

A 1,000-watt amp is only delivering 200 watts to the loudspeakers. Adding to the picture is the fact that 5 ohms of series resistance will mess with the crossover points in the loudspeakers, which can change their frequency response in a bad way, adding feedback nodes.

So what to do? Well, either run a separate 12-gauge loudspeaker cable between the power amplifiers and loudspeakers on stage or utilize something called a “power snake” that has 1/4-inch inputs that use 14-gauge loudspeaker cable instead of 24-gauge microphone cable. For instance, Whirlwind makes a Power Series (Figure 4) of audio snakes for just this type of circumstance.

While the 14-gauge cable will introduce a small amount of loss compared to 12-gauge cable, the improved flexibility of the snake makes it a reasonable compromise. If you’re running a lot of power over very long runs, I still suggest 12-gauge or even 10-gauge.

A quick look at the chart and a little math shows us that 200 feet of 14-gauge will insert only 0.5 ohms in series with the loudspeakers, while 200 feet of 12-gauge adds up to only 0.3 ohms. So these are much better options with very low wattage loss.

I must admit that my first guess would have been losing maybe 20 percent or so of the amplifier wattage using 24-gauge rather then 12-gauge loudspeaker cable, but numbers don’t lie. Using TRS returns on a 100-foot snake to drive a pair of 8-ohm passive loudspeakers/monitors will result in a loss of about 80 percent of the amplifier output wattage due to series insertion loss plus impedance mismatching.

Thus it’s prudent to invest in heavier loudspeaker cables to get the most performance out of a sound system.

As we can see from this example, just because something can be plugged into a connector doesn’t mean that it should be. And it’s why one of the most important things to know is all the types of connectors that might be encountered on a live sound stage, and what signal types are likely to be on them.

Oh yes, and understanding the relationship between voltage, resistance, current and wattage is really helpful for figuring out this sort of thing. More about this in future articles.

Mike Sokol does sound system design and training for JMS Productions, his consulting company in Western Maryland. Visit www.livesoundadvice.com for his educational articles and videos, and email him at mike@livesoundadvice.com with comments and suggestions.
All Posts
Top Stories
Explore All Study Hall